Robots on twitter are a big pain. An example with Jamie alias @HoldemTalkRadio

Spam is an issue on twitter, and I'm tired about it. Since a long time third party application like twhirl or seesmic have implemented functions to report spam and help twitter to ban senders (basically, by sending a tweet to a special user @spam created by twitter team for this). Other services like topify enhances twitter new follower email notification in order to help users to know who follow (based on bio, last tweets, number of followers, ...) them and decide if they should follow back. 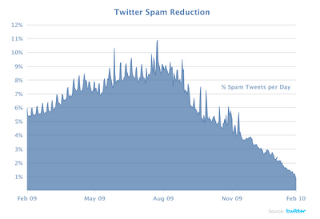 This is a big achievement and I hope it will go even lower in the future.

The issue I'm facing now on twitter is what I'd call "intelligent" spam.

I'll not discussed here why it's a non-sense to rate reputation based on number of followers (ratio between following and followers is a lot more important).

Yesterday, I received an "@lmau" notification.

First thinking is "Nice, someone is including me in his "follow Friday" recommendations !"

Welcome Jamie, Nice to meet you.

According to the title of the lists, Jamie seems to be really power user : "top-im-rockstars", "klout-influencers-coachforyou", "awesome-engaging-people", ...

A quick look on Mrtweet also give me good feedback on Jamie : 39 people have recommended him (while 0 have for me ...)

But something is strange... Jamie recommended me in his #ff, but we're not connected. He doesn't follow me, I don't follow him...

Another strange thing is that Jamie follow 19k+ persons, which is more than the 17k+ that are following him...

Next strange thing is that Jamie has already send more than 100 000 tweets.

A quick look on twittercounter.com show me that he sends few hundreds tweets every day (when big users like @loic "just" send around 50 / day....).

When I look closer to yesterday tweets from Jamie, I see that he sends hundreds of ramdom #followFriday tweets.

What should twitter do to improve that ? Here're a few ideas : * automatically detect accounts that are sending more tweets than a human can, and automatically tag them as "robots" * propose special functions to filter, manage these "robots" users (in my case, I'll just filter them, because I do not what to see their noise) * measure the "noise" in the total number of tweets generated by these robots.

Have a nice day Jamie !